Florida’s mild winter weather brings higher numbers of people outside to enjoy our refreshing, cooler temperatures. Unfortunately, there has been an increase in pedestrian fatalities across the United States in recent years, and a recent study found that Florida has the dubious distinction of being the least safe state for pedestrians. The greater Orlando area, for example, has been named the deadliest urban center for pedestrians. More than 550 pedestrians were killed in the last 10 years alone. The greater Tampa, Jacksonville and Miami areas rounded out the top four most dangerous metropolitan areas for pedestrians. Here are some other […]
Do you like it?0
0 Read more 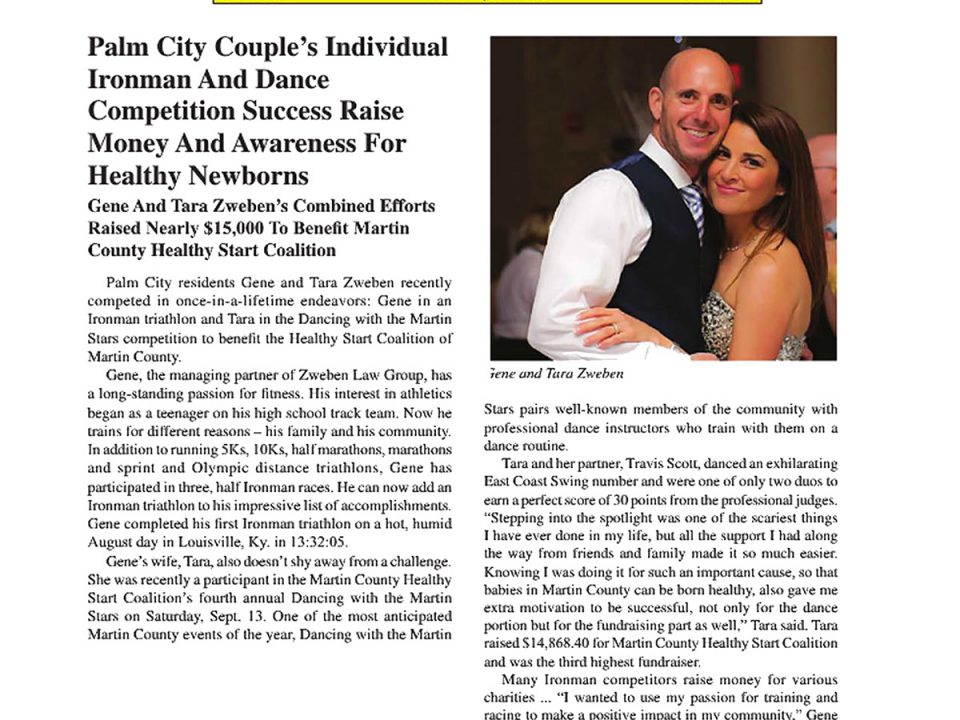 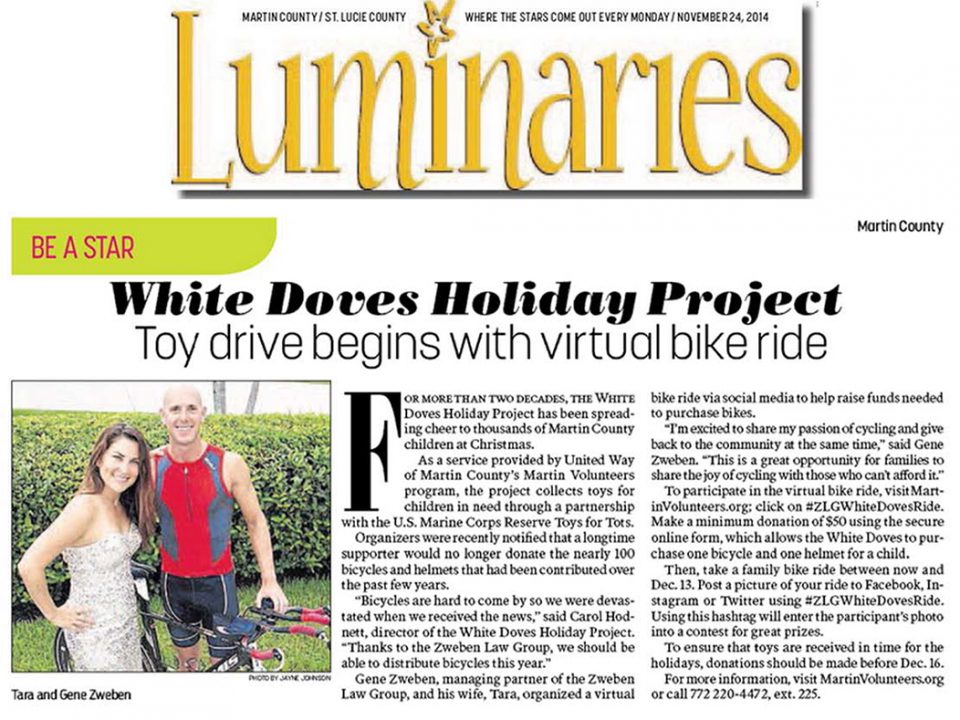 The Ironman and the Dancer Raise Money for Newborns

Gene and Tara Zweben train for athletic ventures while raising funds to help newborns…
Do you like it?0
0 Read more

As an avid cyclist and personal injury attorney who is familiar with the law, I was especially saddened by the tragic hit and run incident that occurred in February in Ft. Pierce where a bicyclist was killed. Whenever I ride my bike, in the back of my mind there is always the fear that I could be run off the road or hit by a vehicle and, along with most cyclists you will speak to, I have had my share of close calls. I never head out on my bike without carefully planning my route in advance, always attempting to […]
Do you like it?0
0 Read more 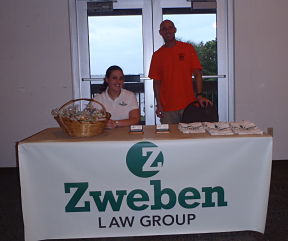 We are happy to be an annual sponsor of Sailfish Striders runs and races, including the Martin County Halloween Half Marathon.
Do you like it?0
0 Read more

In 1972, Personal Injury Protection was selected for the state of Florida in order to provide the residents of Florida with an efficient and timely way of receiving benefits from their insurers to treat their injuries. The legislation that was adopted stated a driver’s insurance company would pay up to $10,000.00, despite who was at fault. Beginning January 1, 2013, changes to this legislation were put into effect. The legislation now requires that the victim of the accident wishing to receive benefits must seek treatment within fourteen days of the accident. A lack of treatment or treatment after the fourteen […]
Do you like it?0
0 Read more

In today’s social media world, people discuss many private details of their lives on very public websites. In fact, how often have you heard, or even joked yourself, that a new relationship or a break-up/separation is not official until it has been posted on Facebook? Attorneys working in the area of family law have become keenly aware of this and now use these social media websites to gather sensitive information and evidence to use against the opposing party. Here are some social media tips to help protect your family law case: 1. Make sure to set all accounts to the […]
Do you like it?0
0 Read more

Most of our clients involved in auto accidents tell us that they have full coverage. However, in many instances, they do not. Full coverage includes what is called uninsured or underinsured motorist coverage. This type of coverage is additional coverage you must purchase. Florida law requires that, in order to reject such coverage or obtain coverage in an amount less than your bodily injury limits, you must sign a specific form. Uninsured or underinsured motorist insurance provides you with an additional layer of coverage in two instances: (1) when the at-fault driver has limited insurance or (2) when the at-fault […]
Do you like it?0
0 Read more

Warm Weather Triggers an Increase in Highway Fatalities in 2012

In the first three months of 2012, highway traffic fatalities increased 13.5%. According to an analysis conducted by the National Highway Traffic Safety Administration, nearly 7,500 people were killed in traffic accidents, up from 6,720 in the same time period in 2011. Experts blame this steep rise in highway fatalities on two things: (1) warmer weather and (2) distracted drivers. Normally, the winter months see a decrease in the number of vehicles on the roadways due to unfavorable, and at times, extremely dangerous driving conditions; however, due to the unseasonably warm winter, more vehicles were on the road in early […]
Do you like it?0
0 Read more
Prev page
1234567
Next page

We take your privacy seriously and will keep your information confidential.